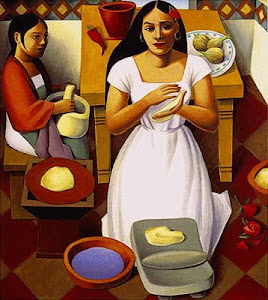 This project was a collaboration between the instructor and all of the students in the section 001 of elementary Spanish I at Bridgewater State University during the fall semester 2011. We viewed the movie Como Agua Para Chocolate (Like Water for Chocolate) and then students, working in pairs, chose a recipe to prepare. Each pair turned in a paper explaining what recipe they used, how they prepared the recipe (including ingredients in English and Spanish), and how it related to the movie. Additionally, students were required to research the history and culture of the dish, or its ingredients, using library resources. The instructor for this class is also a librarian at the University and each pair of students met with her outside of class time to learn how to find appropriate sources. On November 9 the class met at the instructor's home (adjacent to the University) and the students brought their dishes for everyone to sample. Because we had to accomodate a wide range of cooking abilities, not all of the recipes found on this blog are necessarily part of the movie: some are found only in the novel; others are simple Mexican recipes that were not inherently part of the story. This project would not have been possible without the funding from the Course Embedded Grant we received from the University's Office of Undergraduate Research which paid for all the ingredients for these dishes.

I can be contacted at my university e-mail address.